Low-Volume and Mass Production in One Place

Need to quickly test out the market with low-volume parts? Or want to create large quantities of production parts? Then you can’t go wrong with our injection molding services. At 3ERP, we produce high-quality prototype moldings from aluminum molds with quick turnaround times. Our customers can test out their designs for manufacturability and functionality, fast. We also offer plastic injection molding for your high-volume production needs.

Whether you need rapid tooling, mass production mold making or end-use plastic molding with tight tolerances, our team of experienced specialists can offer a cost-effective solution at each stage. 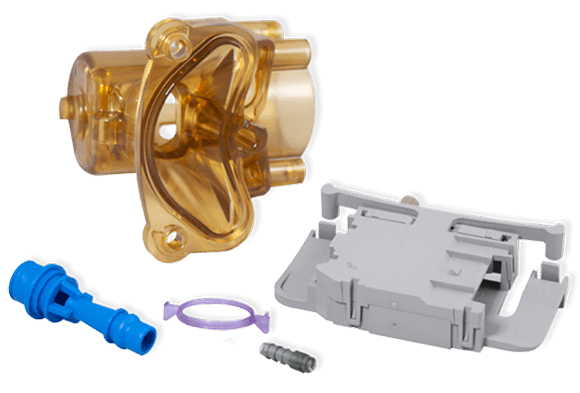 Advantages of Injection Molding with 3ERP

Our molding engineers have rich experience after handling thousands of projects, whatever parts they come across, they can get the right parameters immediately.

By using imported and top brand locally made injection molding machines, we are able to make the most precise moldings.

Aside from our in-house facilities, we have built up strong networks with our partners. Full fleets of injection machines, from 10 tons to 1000 tons are ready for your orders without delay.

See why our customers love us


The parts for the nylon plastic clips have been working very good so far. We have had the product in production for about 3 months now and have not found any issues.
I am introducing you now to our partner, Jay. He is CC’d on this email. He will be ordering the parts from you directly with the next order.
Also, I think we did about 125,000 units with this tooling so far. How many more units do you expect we can run before needing another tooling? 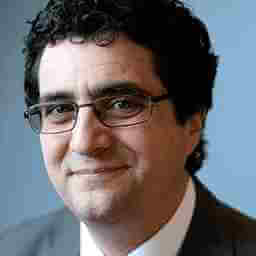 At 3ERP, our experienced team produces injection molded products of the highest quality. We use injection molding in tandem with our rapid tooling capabilities, allowing us to create detailed custom parts quickly and efficiently.  Our injection molding technology allows us to use a wide range of materials and finishes to suit the needs of any industry or application.

Here are some of the options you can choose from: 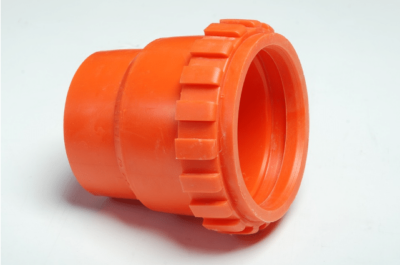 The most popular process for plastics, thermoplastic injection molding is suitable for consumer products, automotive components, and everything in between. 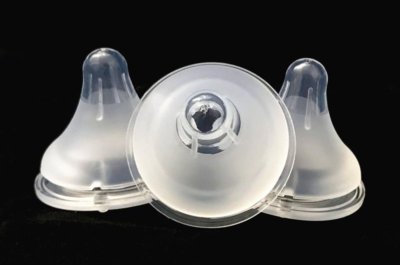 Liquid silicone injection molding is ideal for creating detailed, temperature-resistant parts from thermosets liquid silicone, either alone or with overmolding. 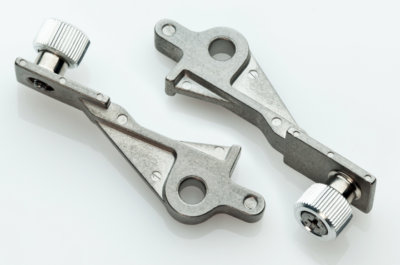 Besides the basic injection molding services, we also offer two variants on the process - overmolding and insert molding. Both of these can be useful in specific situations. 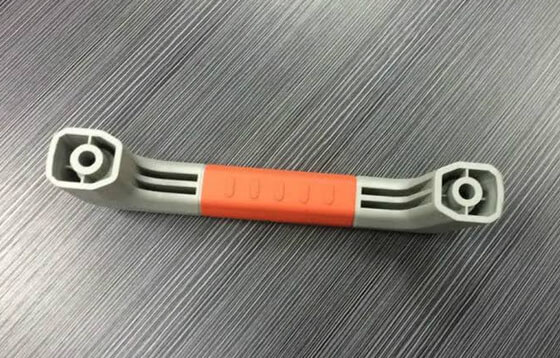 The overmolding method is often cheaper and more effective than other manufacturing approaches that require creating and assembling component material parts separately. The process can also be used to build layered parts from scratch or to add a resistant outer layer to existing plastic parts and tools, providing a more rugged exterior. Toothbrushes consisting of a solid plastic body and rubberized grip are a common example of an overmolded product. 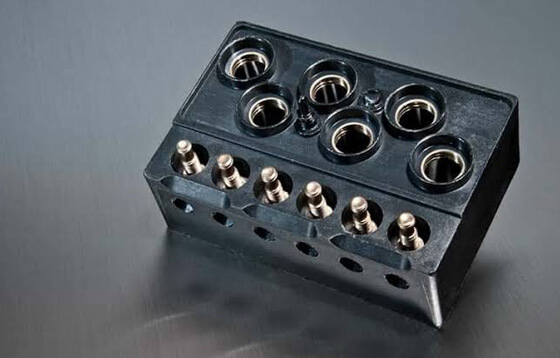 Insert molding is similar to overmolding, but the substrate is not necessarily plastic and does not have to be produced via injection molding. For example, insert molding can be used to add a plastic coating to a pre-fabricated metal part.

Common parts made by insert molding include sharp handheld tools, such as scalpels, which consist of a metal blade partially housed within a plastic handle. Insert molding is also frequently used to create products that incorporate bushings, clips, and fasteners 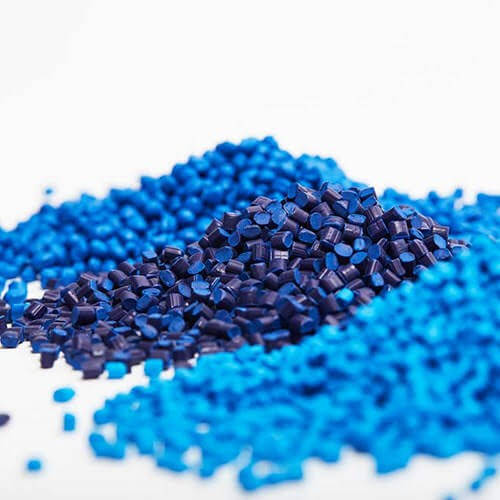 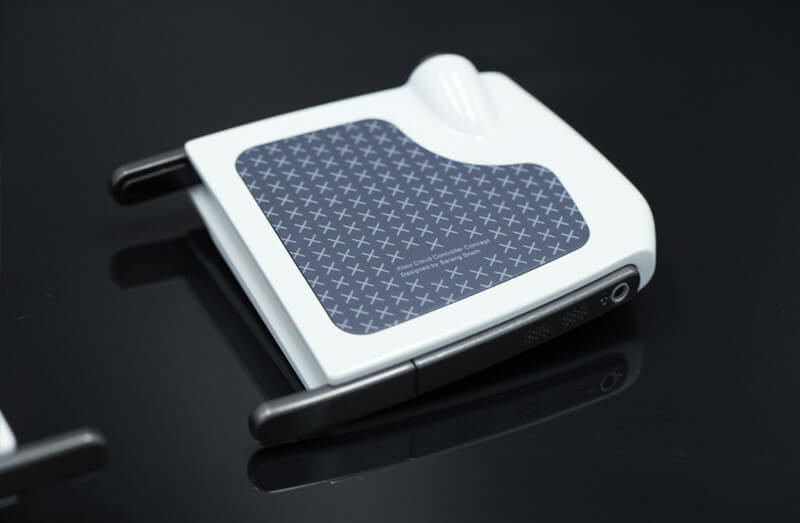 Injection molding is used to manufacture parts for a number of industries, including:

What is injection molding?

Plastic injection molding is the process of making plastic parts via the injection of molten plastic — typically a thermoplastic — into a metal mold, which is usually made from steel or aluminum.

The machine feeds raw material into the mold itself, the geometry of which is effectively a negative impression of the final part and which usually consists of two sections: an injection (A) mold and an ejector (B) mold.

The space between the two sections is the mold cavity, into which material is injected.

Although capable of producing a very wide range of parts, injection molding has some design constraints. Parts must have fairly narrow walls, should generally avoid overhanging features, and must have some degree of draft (tapered sides) so the part can be ejected from the mold.

Injection molding is principally used with plastics, and thermoplastics in particular. Thermoplastics are polymers that soften at an elevated temperature (at which point they can be freely injected into a mold) then return to a solid state after cooling. Injection molding also works with thermosets, which can be cured to make a solid but cannot then be melted back into a liquid state. Less common are elastomers.

What is the injection molding process?

Injection molding is the most popular manufacturing process for producing plastic parts. With an injection molding machine, raw plastic material, and a mold, it is possible to make a huge variety of parts, large and small, durable or disposable, for a number of industries and applications. So how does injection molding work?

Injection molding is a forming process — as opposed to a subtractive (cutting) process like CNC machining or an additive process like 3D printing — that uses a mold as a forming device. The process is suitable for materials like thermoplastics, which are heated until they reach a molten state and then injected into a metal mold where they cool and take the form of the mold’s interior or cavity.

The injection molding process can be divided into four stages: melting the material, injecting it into the mold, cooling the material (or allowing it to cool) until it hardens, then ejecting the final part from the mold. Put simply:

In principle, injection molding is a relatively easy-to-understand process. Executing it, however, is a little more complex.

Injection molding starts with pellets (granules) of plastic material being poured into a hopper. The pellets are then moved from the hopper to a barrel, where they are heated until they reach a molten state.

Once the material is melted, it is forced through the barrel by a reciprocating screw until there is enough material near the exit point of the barrel to fill the mold. This quantity of material is known as a shot.

After passing through a check valve, the shot of liquid material is forced from the barrel into a channel in the mold called a sprue, then through a network of smaller channels called runners and into the mold cavity. These runners are usually organized in a way to deliver material to the right areas of the mold with adequate force.

The material immediately begins to cool and harden once it reaches the mold, but the cooling process can also be accelerated using cooling lines around the mold filled with circulating water.

When the material is fully cooled and solidified, the operator opens the mold, and the molded part can then be ejected. Depending on the rigidity of the material, the use of ejector pins may help to get the part out of the mold without breaking it.

The sprue and runner are trimmed from the part — sometimes leaving a small mark — before the part is ready for post-processing or delivery.

Steps to get injection molded parts

For any injection molding project, important decisions need to be made before the molding process begins. The workflow often goes like this:

1. Select the material: Material selection is the first step when preparing for injection molding. Normally, product designers will have certain injection molding materials in mind when designing a new product. And if they are unsure, making rapid prototypes is the best way to test out different material options.

2. Confirm the quantity: It is important to discuss proposed quantities of molded parts at the outside, because the number of shots determines the kind of mold to be used: a prototype mold or a high-volume production mold.

4. Create the mold: Mold making is a specialist process; these days, molds are often made via CNC machining and EDM, since these processes can produce highly detailed metal molds in a short space of time.

Injection molding is an excellent option for the large-scale production of plastic parts and components. After all, there’s a reason why so many high-tech companies use it for producing parts all around the world. But what makes injection molding so popular?

Well, here are some of its biggest advantages:

The high pressure of injection ensures that the melted material reaches every crevice of the mold before curing. This enables design engineers to incorporate complex geometrics and intricate elements into their designs.

Fast and efficient production ensures a low cost per part, while high production volumes produce further economies of scale. Aluminum, a cost-effective and readily available material, can be used for tools to control costs.

Injection molding with steel molds can facilitate high-volume production of parts into the millions.

Injection-molded parts may be reinforced by adding fillers into the liquid resin, improving tensile strength.

With the proper treatment, injection-molded parts come out of the mold with a smooth finish that requires no further refinement.

What plastics can you use with injection molding?

Injection molding can use almost any type of plastic that can also be combined together. This unmatched versatility is what makes injection molding so popular and suitable for some of the most demanding industries in the world. You can check out our selection of available materials and finishes on this page.

What is the process behind injection molding?

The plastic pellets are melted and are then inserted in liquid form into the mold tool, where it cools and takes the required shape. The process allows for high precision and tight tolerances because it can be replicated exactly each time.

Why should I use injection molding?

Injection molding is one of the most affordable ways to manufacture large quantities of parts, especially for bigger production runs. Even though designing and creating the mold can take time, after that, the process becomes very affordable and efficient.

How quickly can you produce parts using injection molding?

Before production can begin, we will first need to design the injection mold tool. How long this takes will depend on the complexity of your project, but the usual timeline can be as short as a week and as long as a couple of months.